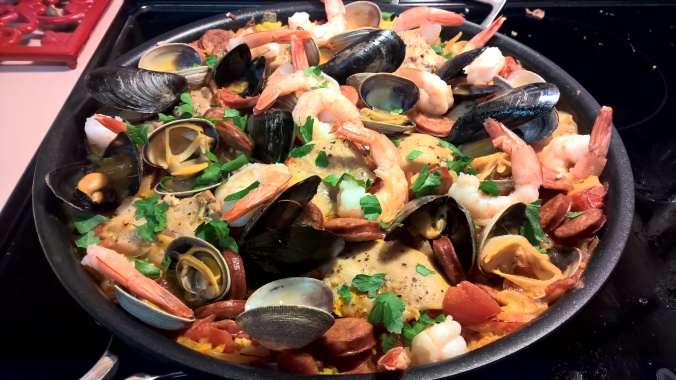 The hubby made Paella last night for dinner (yeah, that’s a picture of it on our stove–have I mentioned that my hubby is wicked good in the kitchen?), which reminded me of this scene in RECAST:

“Leah, I hope you like paella,” Samantha said, pulling out a chair for me at the table. Drake took the chair from her and let me sit, before pulling out the chair next to mine for himself.

“I’ve never had it,” I replied with a smiled and a shrug, “but it smells amazing.”

D took his seat and let his leg rest discretely against mine, beneath the table.

“Well,” Sam replied, taking her own seat and placing her napkin in her lap, “it’s traditionally made with seafood, but being landlocked as we are here, I use chicken and sausage instead. It’s a little like Cajun jambalaya this way, but D seems to like it.” She smiled at her son who nodded and laid his napkin in his lap.

I live just outside of Seattle, so needless to say, I don’t have the landlocked issue Samantha does.  Nevertheless,  that got to thinking: there’s a lot of food in the Shift Series. And it’s all stuff I’ve eaten in real life, either classics from my childhood (in the case of black forest cake) or from random other occasions (in the case of the Paella.) Food plays a sort of important role in the series: from the various salads Cici makes in SHIFT, to the Paella in RECAST, then the breakfasts in DRIFT, and even the tuna noodle casserole at Sol’s house in STAND. So, what if I went through the entire series and made each of the dishes one by one? I could blog pictures and share the recipes. Maybe nobody will care–or maybe one of you will find a new favorite family meal. Who knows?

One thought on “Paella”

One of my favorite ways to unwind is with lively, jovial conversation in a quiet coffee shop or taproom (maybe that's why my characters often end up in one or the other!) While @mswhiddleberry7 and I were in Forks, we learned of a new spot in town called Westend Taphouse. You might have seen me mention them in my stories. Anyway, the owners were so nice, the vibe was perfect. It was a perfect way to spend an afternoon. I might have to make a solo trip sometime just to drink beer and soak in the atmosphere while I write. Turns out Forks is a pretty great place to write about vampires 😉
Episode 6 of Blood Bond is live on Kindle Vella!⠀⠀⠀⠀⠀⠀⠀⠀⠀
Best blended coffee I've had, and the place is in Forks, WA. Me and my sister @mswhiddleberry7 had an incredible time in Forks over the weekend. I'm just now sorting through all the pics, so expect more Forks pics in the days to come.⠀⠀⠀⠀⠀⠀⠀⠀⠀
🤷‍♀️ It is what it is.⠀⠀⠀⠀⠀⠀⠀⠀⠀
Sister weekend in Forks! We haven’t seen any vampires yet, but we’re certain it’s only a matter of time. 😉
SURPRISE!⠀⠀⠀⠀⠀⠀⠀⠀⠀
Loading Comments...
%d bloggers like this: