This post originally appeared on my Tumblr in 2011, near the height of the Occupy  Wallstreet movement.  I’m reposting it here to make it more easily searchable and because I still get questions every once in a while around whether the political statements in RECAST were intentional or accidental. (See below for more on that.)

Like most, I’ve been watching coverage of the Occupy Wall Street movement with some interest. I won’t pretend that I’m as well informed as some, but I’ve tried to at least keep an eye on what’s happening with the local Occupy Seattle demonstrations because, well, I admire people “flexing their collective political muscle,” to use Cecelia’s turn of phrase from SHIFT. And, in fact, quoting Aunt Cecelia brings me to the crux of this post.

When I first saw coverage of the Occupy Wall Street protests, I was sitting in a breakfast pub in Vancouver, B.C., enjoying an order of eggs benedict and a glass of 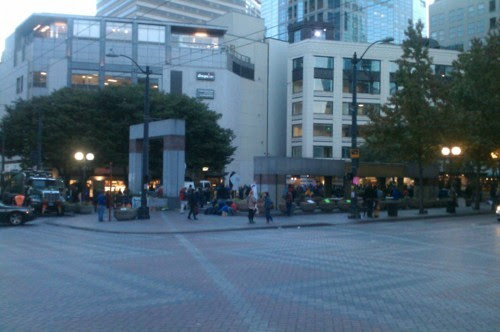 orange juice with my hubby. What struck me, as I read the closed-captioning on the television, was how very similar the Occupy Wall Street movement was to the protests Leah learns about near the end of SHIFT.

Well of course you’d think that, Elle, I thought to myself. You’re just narcissistic enough to draw parallels between your imaginary worlds and this very real movement. Sheesh.

I dismissed the thought as silly.

But then other, local protests began cropping up–an odd coincidence. And, finally, someone asked me if I’d intended to draw comparisons to current events when I wrote RECAST. That’s when I knew I wasn’t crazy. And that’s when I was reminded that my readers are brilliant–that of course they would see the parallels between the Occupy movement and the protests Leah observes in the Shift Series. I realized, also, that if one person had that question, others most assuredly did, too, and that I should speak to it:

I wrote SHIFT, and then RECAST (and the two upcoming books that follow them) during an 8-month bout of unemployment in 2009. At that time, the economic slide was just beginning; everyone knew at least one person (probably more) who was jobless and the outlook was pretty grim. It was in this climate, sensing that the economy would not turn around in 3-5 years (as was initially expected) that I wrote SHIFT. It was impossible for my story not to reflect some of that political-economic angst. As a result, unemployment and other signs of economic unrest are vaguely alluded to in SHIFT. Leah is not even old enough to vote, however, so what would fiscal politics have meant to her, really? Not much, beyond the classroom. Which is why the allusions are vague, only becoming tangible when they pose a threat to her immediate situation.

In Leah’s world, as much as in our own, it was only a matter of time before a large-scale demonstration was organized. So when I first wrote of economic unrest in SHIFT, it was with the intention of giving readers some context as to the larger world Leah was living in. When I wrote about the nationally- televised protest in RECAST it was with the purpose of bringing that larger world home to Leah and her fantastic circumstances. The protests in SHIFT and RECAST were not written with the intention of drawing parallels to any recent political/counter-political movements–it just so happens that they have. In a way, the coincidence was unavoidable.

To illustrate this point, I’ll let you in on a secret : When I see people demonstrating in and around Seattle, a tiny sliver of me wants to go walk around in the crowd to indulge in the fantasy that preternatural groups–Mythologicals–exist and that a few of their kind might be walking through the same crowd… I know, I know, I’m an odd duck, but many of us writer-folk are. Besides, you have to admit, what Leah witnesses in the first chapter of RECAST would definitely be news worth watching. Don’t even try to pretend you wouldn’t be glued to the television. I know I would be. (And then I’d be glued to my laptop, madly drafting another blog post trying to explain how I’d predicted the future… which would be spooky.)